When I was a kid, I aspired to be like my heroes; most of us did. I liked the superheroes, but I also liked those without any supernormal abilities too, such as The Lone Ranger. He proved that one didn’t have to be born on the planet Krypton to be something special; ambition and training could transform someone as well.

The theme of improved humanity, however, served as a cautionary tale in a memorable episode of Star Trek: The Original Series.

In Space Seed the Enterprise happens upon an “ancient” Earth vessel from the 1990s. In the background story, the 1990s were notable for a third World War, waged by leaders selectively bred to have superior abilities. Now a submarine-shaped craft from that era drifts aimlessly as the Enterprise pulls up beside it. To the crew, it represents a historical mystery that they’re compelled to investigate.

Kirk, Bones, Scotty, and a historian, Marla McIvers, beam over to find that the vessel is a sleeper ship: its crew is in a state of suspended animation. The discovery explains the mystery of why their bioscanners picked up only extremely slow heart rates. Apparently they forgot there was a time when ships were so slow that suspended animation was necessary so the crew could endure long flights.

Scotty turns on the lights and it triggers one of 84 life-support canisters. It malfunctions, threatening its occupant, so they beam the man to sick bay. Doctor McCoy marvels at the unconscious man’s refusal to accept death.

When the patient wakes, a little misunderstanding ensues involving a knife and the doctor’s throat. With the incident peaceably resolved, the captain is summoned to sick bay to interview the man who’ll only give his name as Khan. He is evasive and suspicious, and Kirk comes away from the meeting with his curiosity unsatisfied.

When Kirk confides in Spock about his impressions, Spock makes a statement that has stuck with me for a long time. It’s the title of this post, and you’ll have to decide whether or not you agree with it.

An excerpt of Kirk and Spock’s conversation about Khan:

Kirk: Would you estimate him to be a product of selective breeding?

Spock: There is that possibility, Captain. His age would be correct. In 1993, a group of these young supermen did seize power simultaneously in over 40 nations.

Kirk: Well, they were hardly supermen. They were aggressive, arrogant. They began to battle among themselves.

When I heard that, I thought it was so profound. But is it really true?

I think we’ve all known gifted people who never took advantage of their skills. And who doesn’t know of someone who lacked innate talent, yet overcame it to succeed in some endeavor that appealed to them?

A counterargument is made in Gattaca, a terrific movie that I’d describe as moody and stylish, where astronauts board spaceships in business suits. It was released in 1997. 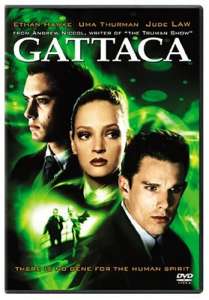 Ethan Hawke stars as Vincent, an older brother who didn’t receive the genetic engineering benefit his younger brother did. The younger boy, Anton, exceeds him in almost everything — including height, health, and athletic gifts.

The one area that Vincent excels, however, is his passion for the space program. It’s this passion that drives Vincent to excel, despite his inferior makeup.

One scene has the adult brothers engaging in their version of a game of “chicken.” They’d swim out from shore, and the first one to turn back lost. Vincent always lost — but not this time. He even has to rescue Anton. When his humbled brother asks how he did it, Vincent tells him he was willing to die before he would turn back.

At some point, haven’t all of us made up our minds to accomplish something – grand or trivial — no matter what the cost?