A long time ago, Sci-Fi fans flocked to a big-budget space opera movie: Forbidden Planet. It was in theatres in 1956. I saw it a good many years later on TV, and I could see why some people credited it as the forebear to Star Trek.

It’s set in a future where a united civilization of planets is patrolled by quasi-military spaceships with alphanumeric designations. Unlike other science-fiction movies from that era, it wasn’t an inferior B-movie monsterfest. It did have a monster, but the premise was far deeper and the production values were superb, thanks to a then-huge $2 million budget. That’s twice what Dr. Evil demanded from the government in Austin Powers.

Forbidden Planet was remarkable to me because, among other things, it tried to justify religious belief — an issue that caused a lot of consternation at my house when I was in my early teens. I had announced to my parents that I wasn’t a believer. I further stated that I couldn’t understand how anyone could have any use for religion.

As strange as it sounds, Forbidden Planet colorfully illustrated a use for religion.

Twenty years before the events of the opening act, the spaceship Bellerophon transports a party of scientists from Earth to the planet Altair IV. Soon after landing, they discover relics of a long- dead alien race: the Krell. One of the party, Dr. Morbius, tries to use a Krell device he finds in one of their labs; it nearly kills him, but it also increases his IQ. He’s delighted to find that his increased mental capacity enables him to learn about Krell society more quickly. Unbeknownst to him, however, his subconscious is also enhanced by the brain boost.

Morbius researches the mystery of the Krell’s disappearance, as well as their super science. At their peak, they had built a civilization free from crime and disease, and they had explored the galaxy. They had accomplished wonders, yet the race was wiped out –virtually overnight – by some catastrophic event.

Have you ever been cut off in traffic? Have you witnessed someone who arrived after you in a restaurant, but was served before you? We’ve all suffered these slights, but after fantasizing about smiting our offenders, we move on. Our civilized side wins out over the mindless, primitive side, and we don’t act on our rage.

But let’s say a part of your mind wasn’t under those constraints. Further, let’s say that part of you could conjure up monsters that would have no problem rending a fellow human being to pieces for taking your shopping cart.

Dr. Morbius had that power, and he didn’t even know it. His subconscious had accessed a Krell device that enabled it to manifest an invisible monster that punished anyone who didn’t meet his standard of behavior. His colleagues from the Bellerophon had been torn to pieces when they voted to return to Earth despite Morbius’ wishes. He, his wife, and their daughter are left untouched by something that he describes as a planetary force.

As the movie opens, a team of would-be rescuers of the United Planets Cruiser C57-D descend on the scene, led by Captain J. J. Adams. He’s happy to find survivors after twenty years, but he is dismayed when Morbius advises him that he wants to be left alone. Adams questions him about the deaths of his shipmates, and he doesn’t believe that the remaining survivors — the doctor and his daughter — are safe.

He proposes evacuating them, which causes the monster to reappear and start killing Adams’ men. Adams eventually recognizes the pattern, and he tells Morbius that he’s the cause of the murders. Adams also reasons that the Krell disappeared because their subconscious minds were similarly endowed with monsters after they activated the machine Morbius discovered.

The doctor takes offense at the notion that he’s the cause of so many murders. During their argument, Adams, Morbius, and his daughter are chased into the Krell lab by Morbius’ destructive alter ego. They feel safe, but Adams points out that his monster is melting the superdense Krell steel doors like butter. Adams ultimately convinces him of the truth by saying “we’re all part monsters in our subconscious, so we have laws and religion!”

This was my Aha! moment. More than Sunday School ever could, the movie illustrated that religion is meant to keep people from acting on their violent impulses. For a moment, I understood its appeal — but history, recent and otherwise, provides examples of violence in the name of religion.

Wouldn’t it be transcendent for the race if mankind could decouple doing right from religious faith? 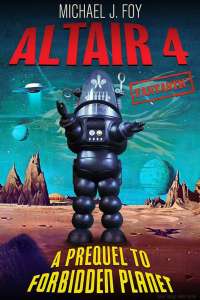