Not only do I like to get sauced — I’ve liked it ever since I was a little kid. I’d even brag to friends at school about the sensations I experienced at the previous night’s supper. The promise of some tasty liquid accompaniment got me to the dinner table faster than one can say “please sir, may I have some more?” And that’s saying something, because my Mom learned to cook in England.

England may be a short hop across the English Channel from France, but they’re a gazillion miles apart in culinary appeal. Guess which country noshed on boiled chicken?

One of my first experiences with solid food started me on the sauce:

To this day, I remember Dad sharing a bite of his hamburger. Eventually, it occurred to me that the burger itself, although tasty, wasn’t the main attraction. It was what came with it that really tickled my fancy. We’ll call it “sauce,” but that’s just a euphemism. Nowadays, I call it by its real name: grease. It’s like a sauce that magically appears during the cooking of the meat patty. Yum!

Béarnaise, mushroom, Madeira, au jus, etc. … This is what I live for at mealtimes.

Oh, wait — did you think I was talking about alcoholic spirits? For shame.

So let me ask you: How many times have you thought, there’s way too much sauce with my dinner?  With the possible exception of egg foo young (which swims in gravy), I’m guessing “never,” right?

I almost always run out of sauce before the main dish is done. That is particularly annoying to someone who sometimes opts for a certain item on the menu, solely because of the sauce that comes with it.

My ever-elusive gastronomic goal is getting the perfect ratio of sauce-to-food- content per bite. Even in the first eating of a meal, this is problematic. Reheated leftovers are even worse.

Have you noticed what happens to the sauce in a meal after it’s been microwaved? It disappears — probably because the water content evaporates. And whatever insufficient amount of sauce remained after you had the meal the first time, you have even less now. Ugh!

But as Scotty used to tell Captain Kirk, you can’t change the laws of physics.

But there is a way to combat this unfortunate effect: if possible, store the sauce in a separate container. You’ll lose less by heating it that way. Be warned, however, that if you go this route, you’ll have to train members of your household accordingly.

The other day, I sprung a pop quiz on my wife after we finished a meal. We had abundant leftover sauce in a separate container, and I asked her, “what percentage of this do we keep for a leftover?”

I forget exactly what she said, but it was something less than 100 percent. She got a failing grade; 100 percent was, of course, the correct answer. Extra credit would’ve been awarded for, let’s say, 120 or 150 percent.

My quest for enough sauce continues. Do you have a favorite? What is it?

For other insights like this, enter your name and email address at https://michaeljfoy.com/.
You’ll also get Instant Notification on New Releases from the author, Special Sales, Sneak Peeks, and Giveaways.

And click on Roswell Meets Noir for the newly released and internationally recognized novella. 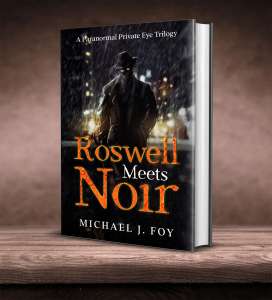