Do you know where the title of this piece comes from? No, it wasn’t Star Trek. It was first uttered by Sir John Dalberg-Acton, a European Baronet from 1837 to 1869. But in my opinion, it was never uttered more powerfully than in the Star Trek: The Original Series episode Where No Man Has Gone Before.

In that show, the starship Enterprise attempts to penetrate an energy barrier at the edge of our galaxy, in order to discover the fate of a previous expedition. They failed, and were lucky to extract themselves from the barrier without blowing up. With the ship badly damaged, they decide to limp to an automated facility on the uninhabited planet Delta Vega and attempt repairs. As a result of their contact with the energy barrier, Captain Kirk’s friend Gary Mitchell (he of the glowing eyes) seems to have developed telekinetic abilities. And they’re growing every day.

An ever-more-powerful Gary eventually decides that the ship and its crew aren’t worth his caring. Before he can take over, however, Kirk and Spock manhandle him down to the planet’s surface. There, they imprison him as they cannibalize the station to fix the ship’s warp drive.

But it wouldn’t be a show if everything went smoothly; Gary escapes. He takes a female psychiatrist, Dr. Elizabeth Dehner, with him after he converts her into a godlike being as well. 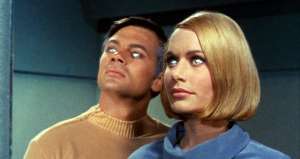 Recognizing a threat to the whole of humanity, Kirk follows Mitchell with a phaser rifle — like that’s going to kill him!

During their confrontation, which Kirk is losing, he turns to Dehner and asks: “Do you like what you see? Absolute power corrupting absolutely.” Pause there.

My guess is that it would depend on your individual makeup.

I created a character, Cord Devlin, who also comes by near-absolute power in Ghosts of Forgotten Empires. He’s an intelligence freelancer, and his handlers at the CIA wonder if he can be trusted. Like Gary Mitchell, they know he faces a similar moral dilemma. Will he be corrupted? Will he lose respect for humanity? They deploy him anyway, because they don’t have any other way to counter an enemy that’s also armed with unearthly powers.

In addition to Cord’s suspect loyalty, he also has an inexplicable preoccupation with Star Trek. It does, however, provide him with a moral compass and typically restrains him from causing undue destruction. But would some personally-held ideal of human behavior be enough to restrict his darker impulses? The stakes are high, given his newfound abilities to annihilate.

Kirk defeats the corrupted Gary by using his phaser rifle to dislodge several tons of rock from above. The rocks fall on Gary while he’s conveniently standing in a grave he meant for Kirk. Problem solved, and humanity is safe from Kirk’s former friend.

So does absolute power corrupt absolutely? Who can know, judging by the experiences of a couple of fictional characters? But it’s a worthy thought experiment.

Do you know anyone who is typically virtuous? How do you think they’d behave, given absolute power?

For a limited time, visitors to my new website will get a free download of Ghosts of Forgotten Empires. The main character, Cord Devlin, uses his fanboy knowledge of the show to help U.S. Intelligence deal with otherworldly threats.