In 1979 I graduated college, so to all outward appearances I was an adult. However, seething under the surface of this grownup was a rabid Star Trek fan who had closely followed the rumors of a big-screen production of the old show.

Several of my classmates anticipated reliving the wonders of life in Starfleet ten years after the original series was cancelled. Funny how most of the engineering class had that in common. Could it be why we went into that technical discipline in the first place?

Anyway, the rumors proved true, and Star Trek: The Motion Picture premiered on December 7. Despite feeling intimidated as applause arose for each actor’s name, critics reported that they were underwhelmed.

They didn’t understand the significance of what they witnessed; this was like a religious experience. Long-absent old friends had returned after there was great doubt that we’d ever see them again.

I stumbled across the movie on TV recently as I surfed channels, and I caught it near the beginning. Comparing it to subsequent Trek movies, I happily noted that Kirk looked like Kirk, and not TJ Hooker. I got drawn into the world of the Federation again.

Wait — that would be a gross understatement. I was more than just drawn in; all the feelings returned that I remembered having when I learned there would be a movie. Some might call it nostalgia, but it felt more like some kind of homecoming.

An enormous cloud of energy threatened the earth. It passed through the Klingon Empire on the way, and it made mincemeat out of three Klingon battle cruisers. It was nothing to be trifled with.

Only one ship was in a position to intercept it: the Enterprise. The only problem was that it was in an orbiting space dock, undergoing a major upgrade.

Kirk – now an admiral — convinced Starfleet Command to return him to the captain’s chair. He also mandated that the final refit schedule be compressed from 20 hours to 12 to have more time with the cloud while it was farther from Earth.

With the Enterprise’s transporters down, Chief Engineer Scott shuttled Kirk from an orbiting space station over to the starship. Great reverence went into this sequence as they toured the outside of the iconic vessel. It probably bored the critics, but true fans devoured every second.

As they engaged warp drive again, the familiar roaring pitch of the engines increased as they accelerated. On a tense bridge, helmsman Sulu announced each warp factor that they safely surpassed. Finally, cruising at Warp 7, Kirk winked at crew member Chekov — and it felt like he was winking at me, as a father figure might.

Why did it make me feel that way? I’m a rational adult.

That’s when it hit home. That’s when I realized the lofty place I hold for these characters in my heart of hearts.

Kirk and company eventually come to know the invader as V’ger. It was only in the final moments of the movie that they discover that V’ger is actually Voyager 6, which had been enhanced by a planet of machine intelligence to fulfill its original mission: to transmit all its data discovered on its voyage.

Simple, right? Not so fast.

At the last moment, V’ger decides it wants more than just a cold upload. It wants to intimately (and destructively) merge with its creator: with humanity.

There have been better Star Trek movies, but I’ve gained a new appreciation for the first one. After all, it built a failed TV series into a franchise with movies, merchandise, TV series, and who-knows-what-else to come. Not a bad legacy for an idea that sees mankind with such an inspiring potential. 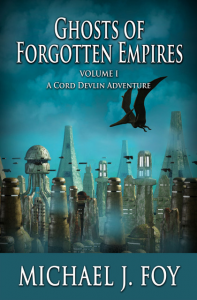